So I’m sitting around thinking, which is particularly bad for me. I’m thinking about my golf tips, stories, advice, lesson content, etc. It occurs to me that not many people really care too much about the opinions and wonderings of Dan Hernandez, Golf Instructor.  After all, I’m not on TV, I don’t have any best selling videos, books and I don’t have a zillion video posts on You Tube.

Now before you go assuming that Dan is in the middle of a low self-esteem period understand this: I KNOW I’ve helped a lot of people understand more about the game and play better golf. That is a good thing. I know too that there are people who think my approach to teaching is way outside  the box.  Some even think I’m crazy.  So be it.

While I’m writing this post, it seems as if Johnny Miller is staring at me. It seems that he’s trying to tell me something. I’m not sure what his picture is saying to me. Johnny Miller is controversial and believes passionately in his views. He owns what he says and no one will make him change his mind.  Hmmm. I am controversial and I know it.  My views on teaching golf do not fit in the ancient doctrines of head down, left arm straight, make a shoulder turn, blah, blah, blah. I also don’t care about not doing “normal” golf instruction and I’m not going to change.  Normal golf lessons don’t normally work anyway. As a matter of fact, I’m gonna’ dig in deeper and just keep going for it and just keep learning.  To do otherwise would just be flat wrong.

There is a a lot of good stuff on the internet and on TV. I just think you have to be careful about what you’re looking at or what you’re reading.  So, from now on, I’m going to do the hunting for you and find the stuff that I like the best.  In Miller’s article below, I’ve highlighted my most favorite parts and put in some Dan notes where I think you should use caution. Enjoy!

10 Rules for Sticking Your Irons 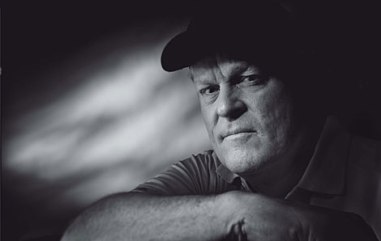 01 Play more than you practice.
Shortly after I turned 14, in 1961, I became the first junior member (whose father was not a member) at the Olympic Club in San Francisco. Playing Olympic day in and day out made me the good iron player I turned out to be.You never seem to get a level lie at Olympic. You’re required to hit a lot of awkward shots, such as playing a fade with the ball above your feet. You can’t work on shots like that on the practice tee, which is why I always played more than I practiced. A lot of things I learned on Olympic defied conventional teaching. For example, from a sidehill lie with the ball below you, the tendency is to pull it dead left—not slice it, as most instructors say—because you straighten your right arm to reach the ball, and you swing over the top. Don’t be one of those driving-range superstars: players who can make their irons sing on the practice tee but are only so-so on the course. Get out and play.

02 Don’t fall in love on demo day.
In 1974, I got a set of old Tommy Armour irons with no chrome on them. These dull-gray clubs had a soft feel to them that was just exquisite. The irons were 25 years old, but after I sawed down the hosels and added some lead tape here and there, they were like magic. I got on the hottest streak of my career. I won eight times on the PGA Tour in 1974, knocking down flags every week. The following year I signed an equipment contract and had to put the Tommy Armours in the garage. Big mistake. No matter what I did, I couldn’t make the new clubs perform like the old ones. If you’ve got a set of irons you really like, think twice before switching to a new set. There are a lot of great new irons out there, and you might fall in love with how well you hit them on demo day.But when you get on the course and face funny lies and try to hit shots, like a high draw or a low fade, you might find they’re completely different.

03 Listen to your shots.
In the winters when I was a kid, my dad had me practice in the basement of our house. I’d hit balls for hours into a canvas tarp tacked to the ceiling.Because I couldn’t see the ball flight, I relied on two kinds of feedback: how the shots felt and how they sounded. Thin shots, balls struck on the toe, and shots hit a shade fat have distinctive sounds. You’re always looking for that crisp thwack at impact. Even from the TV booth, I can usually tell immediately if an iron shot is mis-hit and if it will come up short or not have enough spin to hold. Sound can definitely give you clues as to how well you hit the shot.

04 Distance trumps direction.
If you’ve ever wondered what magic threshold you must cross to become a first-rate player, it’s simple: You must control distance with your irons. I’ve always been obsessed with distance control. When I felt my iron game was at its peak, I’d sometimes ask my caddie for the distance to half a yard. You control distance by hitting the ball solidly and varying the length and speed of your swing. If you do that well, you become more precise, which rubs off on your direction, too. The week I won the 1974 Tucson Open, I hit hole or the flagstick 10 times.

05 Get down on it at impact.
I’m a swing-sequence junkie. I love poring over sequence photos of the best players. The feature all great iron players have in common is that their heads are lower at impact than when they were standing tall at address. They really go down after the ball, not by bending at the hips or dropping their head but by increasing the flex in their knees. They sag their knees down and toward the target at the same time, moving on a downward diagonal line. Now, you’d think this would make you hit the ball fat. But if you lean the club forward, toward the target, so that the shaft is angled ahead of the left arm, you’ll absolutely pure it. Which leads to the next rule. (Dan Note: Most players are going to have trouble understanding this concept (#8) and even more trouble trying to physically do it. What Miller is describing in words is something that a player has a feeling – or sensation – for.  If you’re gonna’ go for this it must be something that you learn to feel – You CAN NOT mechanize yourself into this position.)

06 Keep the angle in your right wrist.
Through impact, the hands lead a trailing clubhead. That delofts the clubface and makes it possible to hit down on the ball and squash it against the face. If you’ve ever wondered how good iron players make their shots bore through the air, this is it. Every effective iron player maintains the semi-cocked position in the right wrist through impact, the right palm facing down. Every bad ball-striker has the palm up. As I said only half-jokingly on a telecast last summer, if you want to be a terrible iron player and avoid getting to single digits, just flip that right wrist so the clubhead scoops and passes your hands.

07 Don’t sweat every detail.
Because iron play is all about precision, there’s a tendency to focus on details that are irrelevant or uncontrollable. For instance, a slightly wet clubface won’t affect distance. And you can’t predict how a small glob of mud on your ball will influence ball flight, so don’t stress about it. A light breeze won’t affect distance much if you hit the ball solidly. Concentrate on things that matter: alignment, rhythm and solid contact. Perform those well, and the small things won’t really come into play.

08 “Photograph” impact.
During one of my nice streaks in the mid- 1970s, Jack Nicklaus stopped me on the range one day and asked what I was working on. I told him I was concentrating on impact, trying to “freeze frame” that fraction of a second.“You can actually see that?” asked Jack. When I told him I could after months of training my eyes to take a “photograph” of impact, Jack said, “You’re crazy; the club is moving too fast.” But, as I said to him, it’s not only possible, it’s one of my secrets for hitting great iron shots. When I took the picture, so to speak, I checked that the clubface was square and delofted slightly, and that I was making crisp contact. Satisfy those impact conditions, and you’ll start chasing flags.

09 Identify the sweet spot on your irons.
I’ll bet that if you asked the typical 15-handicapper to point to the sweet spot, he’d point to a spot too high on the face. Remember, all perimeter-weighted irons have the majority of their mass around the sole of the club, to help you get the ball in the air. That means the sweet spot is below the center of the face. This really comes into play on par 3s, where you’re allowed to tee up.Your objective should be to tee the ball so your “lie” is slightly better than a perfect fairway lie. And even with perimeter weighting, because of the design of the clubhead, the sweet spot is going to be slightly closer to the hosel than the toe.

10 Speed kills.
I can see wanting 10 more yards with the driver, but squeezing extra distance out of your irons is the kiss of death. In my prime, my standard distance for the 9-iron was 125 yards. I hit my 6-iron 160, and my 4-iron 185. I didn’t want to be long with my irons, only smooth. Reining in my swing speed was key to distance control and accuracy. If you can resist the tendency to swing more than 75 percent, you’ll have better balance and rhythm. Your mechanics will be better, and you’ll find the sweet spot more often. You don’t need a crazy swing speed to spin the ball, either: Pure backspin comes from good contact more than anything else.

One thought on “Golf Tip of the Week”